Showing posts from December, 2009
Show all

Proposal for a new Linux distribution 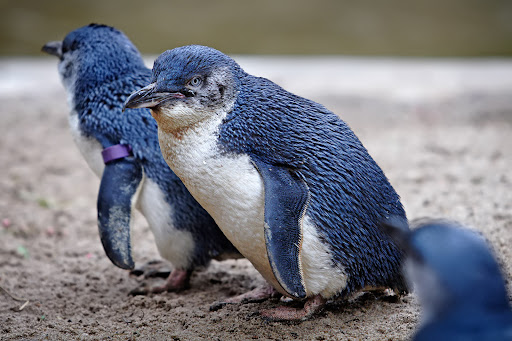 I have decided my life isn't interesting enough, so to make it more interesting I've decided to create Yet Another Linux Distribution (YALD). This YALD will have the name ... drum roll please ...

Named after the Fairy Penguin of Australia, it is meant to be yet another 'lean' distribution of Linux. Here's what I had in mind as a beginning set of requirements;
Fit in, complete, at around 200MB. That's installed.
Based on the latest kernel, whatever that happens to be. That would be something in the 2.6 line, and greater than 2.6.32.
Based on the latest glibc, whatever that happens to be, and not one of the embedded/limited substitutes found in other small distributions.
Based on one, and only one, desktop environment. I'm seriously thinking of KDE 4 (seriously). There is a strong reason for this, primarily that KDE uses Qt, which will make a good foundation for another choice I have in mind.
Stripping out as much of the current software as possible, esp…
6 comments
Read more

You spent how much???

My youngest and I went to see Avatar today. According to her, "it's just a bloodier version of Fern Gully." My oldest has subtitled it "Dances with Fern Gully." And without Robin Williams as Batty Koda for comedy relief. But everything else is there; instead of fairies in a tree you have nine-foot-tall Na'vi in a Home Tree. In Fern Gully the protagonist is shrunk so he can interact with the fairies, while in Avatar the protagonist is wired into an artificial version of the Na'vi so he can interact with the "in-digs". It's a highly predictable movie wrapped in a lot of very expensive eye candy (which, according to published accounts, cost anywhere from $200 to $500 million to make). After sitting through the movie I came out with an attitude that can be best summed up by this shot of Neytiri, except instead of Col. Quaritch lined up on the arrow, I'm imagining it's James Cameron.

There but for the grace of God

- December 19, 2009
I was born and raised in Atlanta, or more specifically, Atlanta suburbs located in DeKalb county. My time in elementary and high schools were average, bordering on boring. Except in one area: high school football.

I suffered from the same high school jock envy that a lot of other males suffered from. After all, who didn't want to belong to a group (the football team) held in the highest regard, and whose members seemed to have the pick of just about any girl on campus? It was the ultimate young male testosterone trap, and I fell into it like a ton of bricks. Or at least I wanted to. My eyesight was pretty bad in high school, and the eye doctor kept waiving the specter of detached retinas and early blindness in front of my parents. I thought at the time the doctor was just full of it. Maybe in retrospect he wasn't. The upshot of the diagnosis was I merely stood on the sidelines, looking with longing at a sport my parents wouldn't allow me to participate in.

The state of the Penguin

- December 18, 2009
Over the past week I've been collecting ISOs and burning CD and DVD ROMs from them for the purpose of just seeing how the boot, and then taking a few moments to see how they look and generally operate. I booted a fair portion of the usual suspects: Mandraive Linux One 2010/KDE, Fedora 12 x86-64, OpenSUSE 11.2/KDE, Ubuntu 9.10 and Linux Mint 8.

I chose to use a Dell 690 workstation (we have multiple machines in the lab where I work) with a quad-core Xeon running at 2.4GHz and 8GB DRAM, as well as a pair of HP Pavilion 533w's with a 2GHz Celeron and 512MB DRAM I had sitting at home (the Pavilion's were purchased for my girls when they were in late middle/early high school).

All of the distributions booted on the Dell workstation. Of the five, only Ubuntu and Mint enabled everything including sound. What was most surprising (in a good way) is how all five distributions recognized the nVidia Quadro card, enabled hardware acceleration (according to glxinfo) and provided the prope…
3 comments
Read more

Happy Birthday to Me 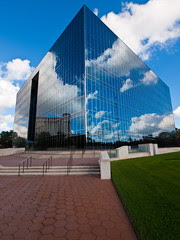 Yes, today was another lovely birthday. I've long since passed the point where I anticipated my birthday. Now I dread them. This year, rather than sit around and feel sorry for yet another year passing, I decided to go out and shoot. And because I was in such a wonderfully grim and cheerless mood I decided to drive around International Drive here in Orlando and shoot a bit of its long, slow decay. I took Megs with me; I'd bequeathed my E-300 system to her for her to use this coming spring in college. She needed the practice.

We started at the Sea World end of I-Drive, near the old Harcourt Brace Jovanovich building (or whatever it's called these days). It caught my daughter's eye because of the huge "For Lease" sign plastered across the top two floors of the building, visible from I-Drive. We drove around and into the empty parking lot; I assume it was empty because it was Sunday, but you never know. The lovely color shot is from the front and shows the neatly…
1 comment
Read more
More posts