Showing posts from July, 2013
Show all

of cameras and photography, a personal journey 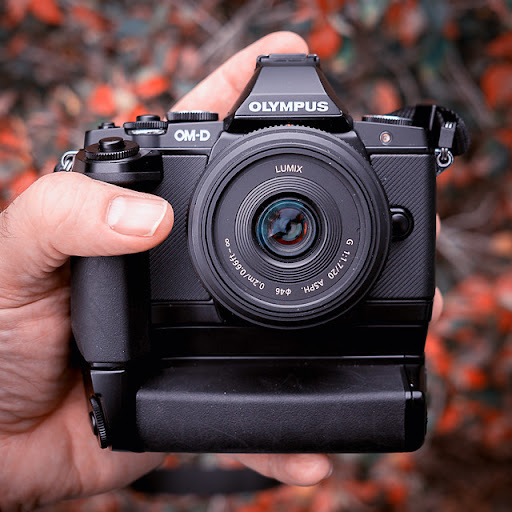 I've been thinking long and hard about my photography lately, and I've come to realize I spend way too much time (and precious cash) on equipment and far too little on the art of photography itself. Right now the most sophisticated camera in my collection is the one at the top of this post, the Olympus OM-D E-M5. I also have a collection of µ4:3rds lenses, the majority of them small primes. I carry them around in a bag, yet I spend too little time using it, and have too few quality images to show for the equipment investment. Funny thing is I've managed reproduce, with µ4:3rds lenses, the type of 35mm film system I used back in the 1970s and 1980s, before I pretty much sold it all and bought a Nikon N90 and a single Nikkor zoom in 1989. The Nikon is what I used, in decreasing frequency, until I took up with digital cameras in by purchasing a Canon A300 point-and-shoot in 2003. Over the last ten years I've traced a blazing trajectory from the Canon A300 point and
4 comments
Read more

programming outside my comfort zone 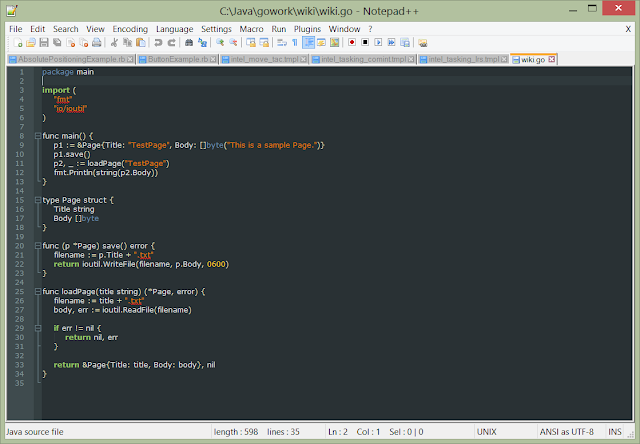 Sample Go language inside Notepad++ editor, using Java syntax highlighting My experience with computer languages extends all the way back to APL ( A Programming Language ). I was exposed to it at the Fernbank Science Center in Atlanta in 1971. I got into APL for two reasons; the cool symbols across the top of the keyboard (a mechanical teletype) and the fact that I could play moon lander, one of the computer games written in APL that I later started to hack. For a high school junior who was growing up through Star Trek, 2001, and the Apollo program, learning APL on an IBM 360 mainframe was a dream come true. Since then I have continuously been programming in some language, from assembly on up, on some platform, from microprocessors on up, until today, and I don't see myself changing until I can no longer see a monitor, sometime in the unknowable future. For someone with such a very long period of software engineering in their lives, staying with any language or even a group
Post a Comment
Read more 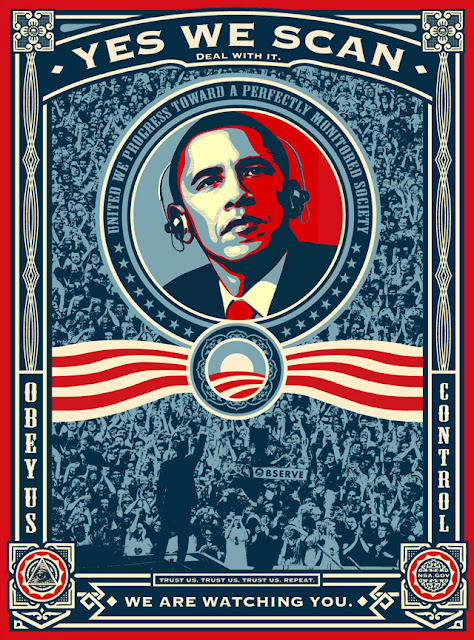 From Shepard Fairey (creator of the original "Hope" poster): "Warrantless surveillance under Bush was extremely disconcerting, but not surprising in the post 9/11 climate of fear. The extent of Obama’s spying is unacceptable and I feel sickened and betrayed by someone I dedicated a huge amount of time, energy, and money to support based on the way he presented his views as the antithesis of Bush’s. The charge of Edward Snowden with espionage for exposing the Prism program only dims my view of the Obama administration further." Link:  http://blogs.artinfo.com/artintheair/2013/06/27/shepard-fairey-likes-those-nsa-themed-remixes-of-his-obama-hope-poster/ Link:  http://www.latimes.com/entertainment/arts/culture/la-et-cm-shepard-fairey-obama-nsa-surveillance-20130626,0,1666290.story Happy Fourth.
Post a Comment
Read more

fedora, the day after 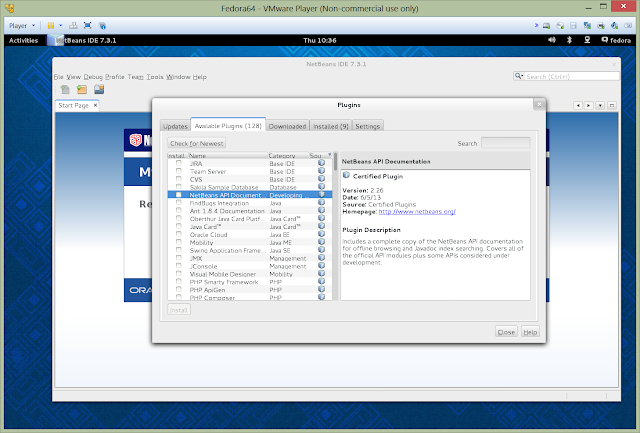 Playing a bit with Fedora 19 after morning chores and before I head out for some late morning errands. The performance of the desktop is reasonable but not blazing fast, which is to be expected on a VM. It's Good Enough for what I want to accomplish, which is functionality. If I need performance and if the application isn't Linux-specific then I'll move it over to Windows 8, shut everything down that isn't necessary, and run it on an OS running on bare silicon. I decided to install Netbeans 7.3.1 on this VM to see how it performs. So far it's usable. In addition to Java support I also installed support for C++ (see why below). I'm also going to install Scala support as well to mirror how I have Netbeans 7.3.1 installed on Windows 8. After further investigation I've discovered that the version of Java being pushed by Fedora 19 is Java 7 update 25, which is the current Oracle release. I may (I say may) uninstall the Oracle version and go with the version
Post a Comment
Read more

another day, another fedora release 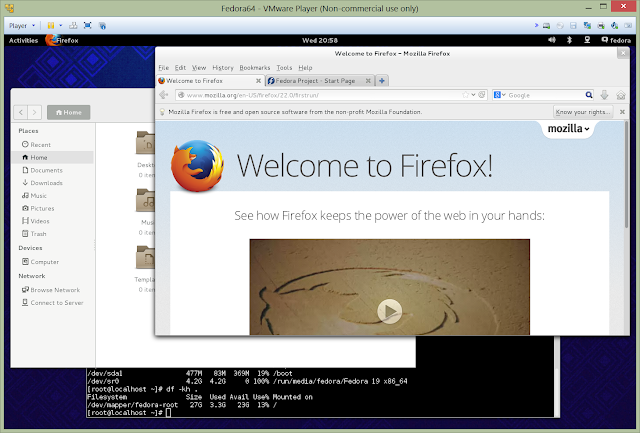 Logged in and getting ready to do something... dangerous? Fedora 19 hit the bricks sometime Tuesday, 2 July. And I dutifully downloaded yet another DVD ISO (at around 4.2GB) of the latest release and installed it in a VMware Player virtual machine. I've trimmed the number of Linux VMs I carry around these days to just two; Fedora and Linux Mint. And when I was ready to install Fedora 19, I blew away Fedora 18. I don't bother to keep any older releases anymore, and make no attempt to upgrade any older releases either. I was pleasantly surprised this time around with how Fedora looked and installed, for the most part. I'll explain what few things I didn't like as I come to them. And this time, I'm going to do something I haven't done in a long time; I'm going to display a series of screen captures to illustrate my points. One of the very first pleasant surprises to great me was at first boot. Fedora 19 has provided a very clean, very professional lang
Post a Comment
Read more

be careful before you buy that new camera 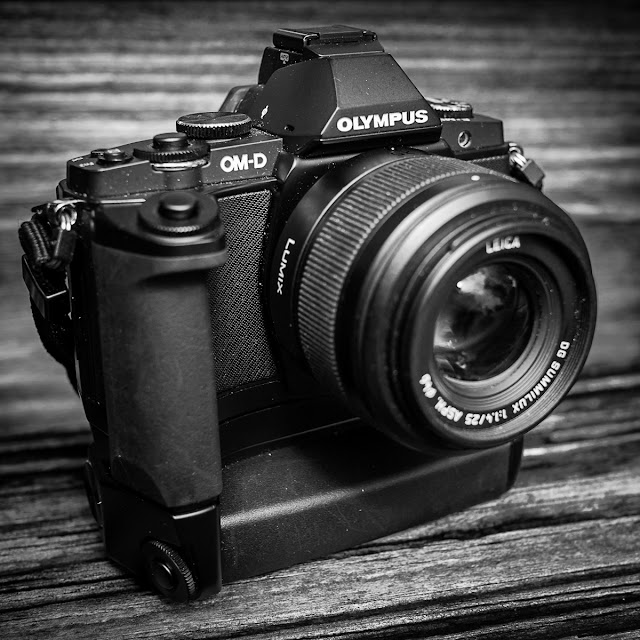 OM-D E-M5 dressed out in all its finery The last month or so has been thick with camera announcements. First there were the bodies, such as the Olympus E-P5, the Leica X Vario, a trio of Pentaxs, the Android-based Samsung NX, Sony's refresh to their RX1 (RX1R) and RX100 (RX100M2), the Fujifilm X-M1, and today, the Canon 70D. And then there were the lens and firmware update announcments. But the real eye-catchers for me have been the E-P5 kit (body + 1.8/17mm + VF-4 EVF) at the start and the Canon 70D. In particular the 70D for its video capabilities. Why the 70D? Engadget is one of the few sites that has two videos using the 70D, one that was used to shoot the short "Handmade", and the second to shoot the making of the short. The second is very interesting as it shows how the film maker used the touch screen to pick the focus points int the movie, and when a point was chosen, the 70D smoothly changed focus without the the in-and-out focus flicker dance that takes p
1 comment
Read more
More posts