I hadn't received my openSUSE 11.1 boxed set yet, in spite of pre-ordering it December 9th, and it looks like it won't ship until January 5th. No matter. The downloadable ISOs are available and I just grabbed the official release versions and re-installed.

Installation from the LiveCD was super simple. In fact it may have been too simple. I missed the part where I could specify the system name, and I never caught it. Instead the system name wound up being 'linux-0dg5' which I have no idea how it was derived. In the end I grepped for the system name in files located under /etc, and changed (with vi) it to 'europa' in just about every file where it seemed to matter (/etc/postfix/main.cf, /etc/hosts.YaST2save, /etc/HOSTNAME, and /etc/hosts). There are a set of files under /etc/ssh that still have the older system name, but I'll deal with them at a later time. 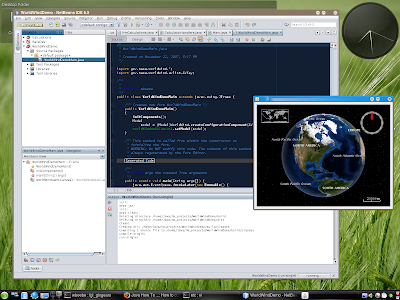 The screen shot above is the recently released NetBeans 6.5 running with the latest Java, version 1.6.0 update 11. I've opened up the now-musty WorldWind demo application just to make sure everything works, and to check that the ATI drivers (version 8.12) are properly installed and running. I also manually changed the look-and-feel to Nimbus by editing netbeans-6.5/etc/netbeans.conf and adding '--laf com.sun.java.swing.plaf.nimbus.NimbusLookAndFeel' to netbeans_default_options. Java 6 update 10 (and later) do a poor job of using the native look-and-feel under Linux, and won't even work with KDE. The old default Metal is certainly dated. Nimbus, while it might not win any awards, is in my not-so-humble opinion much better.

As I said in the first paragraph installation was very simple. Once installed from the KDE LiveCD, I was able to go to the Community Restricted Formats/11.1 page and apparently download all the other 'missing' codecs. I was then able, to play once, one of my ripped movies (Forbidden Planet). However, after exiting Kaffeine I was unable to play anything else because "All Audio Drivers failed to initialize!" That's a quote from the Kaffeine Player's pop-up dialog. So, rather than hassling with Kaffeine I did what I've learned to do in this situation, I installed VLC. Now everything plays. The only limitation left is my inability to play DVDs. I've been down this path before, and I'll get it fixed.

I had rather hopped that the fugly and non-cute dancing penguin splash screen was removed from the public downloadable version, but alas it isn't. So, digging into my old posts I found my rant against it with openSUSE 10.2, and this time followed the suggestion of one of the posters. I fired up YaST2, navigated to System, and fired up the /etc/sysconfig editor. I then found the bootsplash flag, set it to 'no', and saved everything. 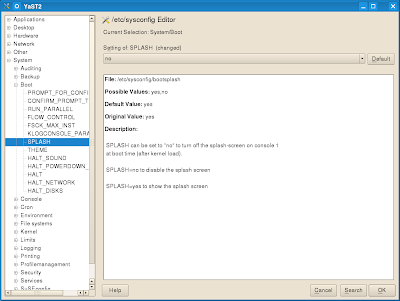 It looks like I've suppressed the little dancing penguins.

Other items of interest:
KDE 4.1 and openSUSE 11.1 have their quirks. But overall I like how it's working, and the fact that I can install what I consider core to get work done. DVD playback is a nice-to-have and I'll get it installed over the next couple of days (when I find the time). It is a comfortable development environment; I have my tools, my shells, and my languages of choice (Java, Ada, c/c++, objc/c++, Python) at the latest revisions running on an OS foundation I know and can work with.
Java Linux Netbeans Suse